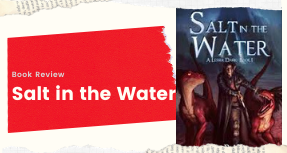 I received this book free from the author in exchange for an honest review and with the understanding that I would use the paperback on #Bookstagram #Booktube, and anywhere else I decided for free promotion of my choice.

Here is the book unboxing and my first thoughts upon seeing it.

There are a thousand ways to die in the desert—desperate outlaws, deadly predators, murderous elements, and betrayal…
Kaitar Besh, a veteran scout as legendary for his cynicism as his skills, is ordered to brave the deadly Shy’war-Anquai desert one last time. Escorting Leigh Enderi—a greenhorn Enforcer with a reputation as shady as his own—he soon realizes the ghosts of his past have come to haunt more than his nightmares. When the mission breaks down in the wake of bitter hatred and mistrust, even Kaitar’s fabled skills may not be enough to bring them home again. Stranded in the red wasteland without contact, food, or water, they uncover a betrayal that could bring all they hold dear crumbling to the dust. . . and tear down the wall of lies surrounding them.

I have never read a book quite like this. The creative characters and world-building were amazing, and Kaitar Besh (that’s him on the cover) was by far my favorite character, though Senqua stole my heart as well. She and Besh are the same species, and I love their grit and spit.
I love the world. Each of the species in it make sense to a desert environment, and the authors seem to pull heavily from desert culture mythos without completely stealing their creations from any specific culture (that I could tell). The really fun bit about this book is that it could be science fiction, it could be fantasy. There’s no clear explanation for where/ when it takes place. Although there are humans and a group of races referred to as enetics. It would seem that they were once human, and somehow devices called “Toros” created a “Bloom” which changed them. There is also a city environ that is operated by a group called the Syndacit, and the humans from that world all have “shelfs” in their brains which can be removed to wipe their memories/ personality. But there are also beings that seem to be robots, though never specifically called that. (See, there’s this whole sci-vibe?) There is no reference to earth, or our world as we know it, and the bloom is never really described as being science, rather treated as something more mystical so a very fantasy feel as well.
I would put a word of caution, there is a lot of “flopping breasts” in the beginning, which I don’t know why as there wasn’t such a focus placed on dangling penises. There was no sexual intent behind it, just a weird focus on it.
The book, much like the world it creates, is one of harsh realities, violence, and has a Wild West feel of lawlessness and thuggery.
Overall, I enjoyed the story and I do look forward to reading the next book in the Lesser Dark series. Do you enjoy gritty new worlds with harrowing and winding plots?

Take a peek inside on Amazon today.