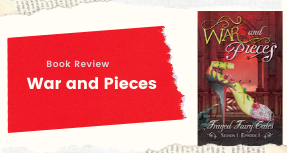 I have been a fan of Jo Michaels blog for a bit, and when I saw this joint project she was working on, I knew I wanted to give it a read. Especially because, Zombies! Squee!

Once upon a time, in a land far, far away, there were zombies…That’s how it all started. Authors have created a major problem with stories like Cinder, The Dark Queen, and Asleep, and it’s wreaking havoc here in Ever After. Our queens are fighting for their lives. Rather like Mother Nature, keeper of the fine balance that’s life in your world, tales that begin with “Once upon a time” were never meant to be messed with. Now, Ariel is underwater with all the defenses she’s been launching, Aurora hasn’t slept in weeks, and Rapunzel is tangled in… Well, I can’t even begin to tell you. Rather than try, I’ll let you see for yourself. You and I will talk again afterward—if I survive long enough. So, as our fateful story begins: Once upon a time, in a land far, far away…

I was more than a little surprised to read this story in less than an hour. I don’t know what I was expecting. Well, I do. I realized it was a serial, but I really was counting on at least some of the above description to be in the first serial. Instead, I got the start of a Snow White and Aurora mash-up story, which left on an unexpected cliff hanger that never even introduced the other storylines. In this world, Snow and Aurora are sisters, which wasn’t too difficult a leap for me, as it fits with older versions of the story in which Snow White and Rose Red were sisters (The story for which Sleeping Beauty is based.) and I liked how it pulled from the old version in which Rose Red’s future husband was a prince cursed by a witch and turned into an animal.
But it didn’t start with that part of the story, and those who only grew up with the Disney version would be hopelessly lost where this serial picks up.

On top of that, they took one of my favorite princesses and kind of turned her into a dabbler-in-the-dark-arts who ends up letting her own greed destroy her happily ever after… or at least, that’s where I suspect the story is going. I really don’t know.

There were a few anachronisms that really pulled me out of the story. I had a hard time picturing the world in my head. On one hand, it has the fantasy elements: Capes, princesses, princes, castles, villages, magic and more; on the other, it has parks, coffee, and sewing machines. It doesn’t really feel like urban fantasy but like the opposite of UF. In UF, the goal is to take the modern and boring and introduce the fantastical to pull us out of the modern and boring. But to me, it felt like they did the opposite. They took what made fantasy awesome and injected it with the most boring parts of modernity. I hate reading women’s lit where the female lead is lamenting how it’s not fair that she can’t get pregnant/ have kids, and she turns her world upside down driving those she loves away with her sole quest of what comes so easily to others.

That’s what they did to Aurora.

Women’s lit meets fantasy might be the perfect mash-up for some of you, and if it is, go ahead and give War and Pieces a try. This first one is free. I will go find another one of Jo Michael’s books to read.