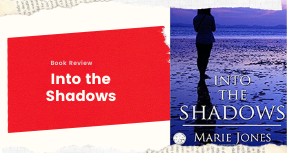 I am excited to share Into the Shadows by Marie Jones with you today. I received a copy of this book from the author in exchange for an honest review and to use as I see fit across social media.

My first step was to do an unboxing video when I received the book.

I actually love the cover and was very excited for this book which I originally thought was a paranormal thriller. However, the author has it listed as a Romantic suspense and after reading it, I agree.

Awarded FIVE STAR BADGE from ‘READERS FAVOURITE’ and SHORTLISTED for UK NOVEL WRITING COMPETITION 2017 Lily Crossways lives a controlled life, ensuring she never experiences hurt or disappointment. Until, that is, she returns home from a short holiday in Dingle, where she discovers an eerie image of a desperate woman on one of her photographs. Yet how can this be, when Lily was alone that day on the beach? The woman seems to be calling to her, if only Lily can find and rescue her. Lily returns to Dingle and her search leads her to cafe owner David Carson, this missing woman’s brother, and the man who will turn Lily’s life upside down in every way possible. Lily must now convince him to trust in her, taking bold steps to prove herself to him, and together track down his sister before it’s too late. But nothing can prepare Lily for the secrets she uncovers about herself, her own family and how all their lives are intertwined from a distant childhood visit.* Number 1, Amazon Kindle/Literary, April 2016

After reading this, I’m not sure how I felt about it. There was a lot more drama than thriller, and more romance than I am usually a fan of, though that was kind of my favorite part. I loved the glimpse into Ireland and it put me in the mood for another Irish adventure.
But there were so many things that I didn’t like.  The biggest struggle I had was the editing. All of the dialogue is done with single quotes, instead of the double I am used to, which left the author with no choice in how to demonstrate one’s thoughts to oneself except to say “she thought to herself.” But it was consistent, so I can’t really say that it was wrong, just very distracting. And then there was the adaptation to English and Irish accents and spellings, which was kind of fun as she didn’t do it too heavily, but still had me double reading things at times. There were several consistency errors, like at one point the main character took off her coat and set it on a chair, then a page later took it off again.  Most of those probably should make me rate it far lower.
Then there were aspects of the story that I didn’t care for. I’m not sure if it’s a cultural thing, but from the back I was sure that the sister was dead, and her ghost was showing up in the photo. But that never crossed their minds. I really couldn’t stand David. I mean, I get that he was in a very emotional state over everything going on, but how she could fall for him instead of the friendly light-hearted and always kind bartender was kind of beyond me. It had this Twilight feel that I am just so over.
The myriad twists and turns felt very contrived, but I suppose one could say that it comes down to whether you are a person who believes in fate and meant to be’s. I’m not.
But there were no major plot holes, the pieces all fit together in a rather predictable puzzle, and the romance was clean with a touch of spice, so if those are your kinds of jam you will probably enjoy this book.

Want to take a peek inside?

I didn’t hate it, but I wouldn’t read it again and I don’t think I was invested enough in the characters to read the second book if there is one. Unless it’s about the bartender, Greg. I would read his story.