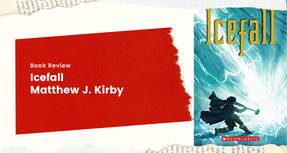 Trapped in a hidden fortress tucked between towering mountains and a frozen sea, Solveig–along with her brother the crown prince, their older sister, and an army of restless warriors–anxiously awaits news of her father’s victory at battle. But as winter stretches on, and the unending ice refuses to break, terrible acts of treachery soon make it clear that a traitor lurks in their midst. Solveig must also embark on a journey to find her own path. Yet, a malevolent air begins to seep through the fortress walls, as a smothering claustrophobia slowly turns these prisoners of winter against one another.

Those charged with protecting the king’s children are all suspect, and the siblings must choose their allies wisely. But who can be trusted so far from their father’s watchful eye? Can Solveig survive the long winter months and expose the traitor before he manages to destroy a kingdom?

Based on the cover, I thought there would be magic in the story. Though there isn’t, I still absolutely loved this historical fiction story. I really related to Solveig’s struggle as the middle child who felt out of place and not as important in her family dynamics. I loved watching her grow from just a shadow trying to fit in by helping where she could, to blossoming into a heroine who inspired others to be greater than they thought they could be.

The Nordic setting and the story were also fascinating and well-researched. The teases of mysticism and prophecy as well as the question of whether it was real or whether people’s belief was enough to make it seem like it could be real are pretty heavy concepts for a book aimed at pre-teens and teens. I’ve been on kinda a nordic kick with my entertainment lately and really appreciated the level of research the author did, given this was written 10 years before most of the stuff I’ve been enjoying.

An excellent coming-of-age tale with real depth for the right readers and a lot of interesting action and suspense for the average reader. Highly recommend. 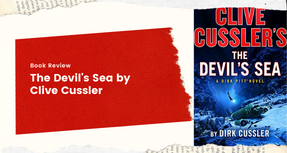 Fearless adventurer Dirk Pitt must unravel a historical mystery of epic importance in the latest novel in the beloved New York Times bestselling series created by the “grand master of adventure” Clive Cussler.

In 1959 Tibet, a Buddhist artifact of immense importance was seemingly lost to history in the turmoil of the Communist takeover. But when National Underwater and Marine Agency Director Dirk Pitt discovers a forgotten plane crash in the Philippine Sea over 60 years later, new clues emerge to its hidden existence.

But Pitt and his compatriot Al Giordino have larger worries when they are ordered to recover a failed hypersonic missile from Luzon Strait. Only someone else is after it, too…a rogue Chinese military team that makes their own earthshattering discovery, hijacking a ship capable of stirring the waters of the deep into a veritable Devil’s Sea.

From the cold dark depths of the Pacific Ocean to the dizzying heights of the Himalaya Mountains, only Dirk Pitt and his children, Summer and Dirk Jr., can unravel the mysteries that will preserve a religion, save a nation…and save the world from war.

Anyone who knows me, knows I am a huge Dirk Pitt Fan, which is why when my husband saw this new Dirk Pitt while he was shopping, he had to pick it up for me. Talk about true love! The Devil’s Sea is a fantastic addition to the Dirk Pitt series. But I am struggling with Dirk Giordino’s seeming lack of aging, lol. I think my age is just catching up to me and making me more self-conscious. Cussler’s books do a fantastic job weaving real-world politics into their tales and this one is very focused on China and the conflict with Tibet and the Dalai Llama as well as how China is very much in a tech war with the US and possibly an arms war as well.

It is a fun light read full of ocean and mountain adventures, which are my favorite adventures, and plenty of action. If you are a Dirk Pitt fan, you will absolutely love this addition to the series!

Take a sneak peek on Amazon by listening to an audio sample or having a  sample sent to your Kindle.