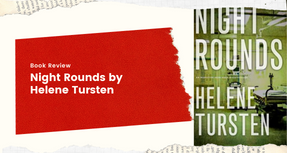 The fourth investigation in the nationaly bestselling Swedish detective series

Irene Huss is a former jujitsu champion, a mother of twin teenage girls, the wife of a successful chef, and a Detective Inspector in the Violent Crimes Unit in Göteborg, Sweden. And now she’s back in the gripping follow-up to Detective Inspector Huss. One nurse lies dead and another vanishes after a local hospital is hit by a blackout. The only witness claims to have seen Nurse Tekla doing her rounds, but Nurse Tekla died sixty years ago. Irene Huss has the challenge of disentangling wandering ghosts and complex human relationships to get to the bottom of this intriguing case.

I absolutely love international detective thrillers. They have a different flow than most USA based detective thrillers. There is a lot of fun details about the culture that bleed through. That is all the case for Night Rounds as well. I can’t say that I adore Irene Huss. I actually kind of struggled with liking most of the detectives in the book, TBH. Maybe it’s a cultural thing, but it was interesting to see that women in Sweden seem to run into similar struggles of how their roles are being shifted in culture and that there is kickback there just as we experience here. I will say that Helene Tursten’s red herrings were really quite good. Right until the end, I wasn’t sure who the killer was and she clearly set it up to mislead the average reader into falling into the same trap that most of the male detectives in the book kept falling into, underestimating what women can and will do and why.

While I wasn’t super won over by the detectives, I absolutely loved Tursten’s writing. How she mixes the mundane struggles of balancing life with being a detective, how we get as much of a look into Huss’s family life as her policework, and the ever-relatable feeling of struggling to balance personal and self-care around all the responsibilities of being a woman in modern society. I also felt like one of the reasons the red herrings really stood out is that Tursten makes a very solid effort to show how real police work is not getting a suspect early on and then digging into all of it to prove that they were guilty, but looking at the whole of the evidence and following up a lot of potential leads that would never quite resolve enough evidence to completely dismiss them but also ran cold on being able to follow up further. Like life, the police work wasn’t as linear as we often get in US-based detective thrillers and I really enjoyed that aspect to it.

Want to learn more about Night Rounds? Check it out on Amazon.