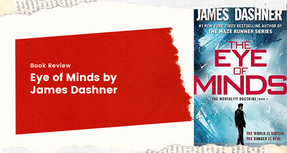 From James Dashner, author of the #1 New York Times bestselling Maze Runner series, comes the first book in the bestselling Mortality Doctrine series, an edge-of-your-seat cyber-adventure trilogy that includes The Rule of Thoughts and The Game of Lives.

Includes a sneak peek of The Fever Code, the highly anticipated conclusion to the Maze Runner series—the novel that finally reveals how the Maze was built!

The VirtNet offers total mind and body immersion, and the more hacking skills you have, the more fun it is. Why bother following the rules when it’s so easy to break them? But some rules were made for a reason. Some technology is too dangerous to fool with. And one gamer has been doing exactly that, with murderous results.
The government knows that to catch a hacker, you need a hacker. And they’ve been watching Michael. If he accepts their challenge, Michael will need to go off the VirtNet grid, to the back alleys and corners of the system human eyes have never seen—and it’s possible that the line between game and reality will be blurred forever.

Praise for the Mortality Doctrine Series:

“Dashner takes full advantage of the Matrix-esque potential for asking ‘what is real.’” —io9.com

“Set in a world taken over by virtual reality gaming, the series perfectly capture[s] Dashner’s hallmarks for inventiveness, teen dialogue and an ability to add twists and turns like no other author.” —MTV.com

“A brilliant, visceral, gamified mash-up of The Matrix and Inception, guaranteed to thrill even the non-gaming crowd.” —Christian Science Monitor

I struggled to get into this story as the parallels to Ready Player One were so painfully obvious. From the hanging out in virtual worlds to the trio team of one girl and two boys, the big win goal that will “change” the MCs life , and the secret underlying plot that throws a wrenching the MCs goals. It was almost enough to make me put the book down.

But Dashner tells a tight story and is excellent at driving you forward even when you are pretty confident you’ve already figured the story out. I did enjoy some of the elements of worldbuilding that is why I enjoy a lot of LitRPG, the fantastical game worlds within worlds, the over-the-top quirky characters that you can only get away with in spec fick, But at the end of the day, the creative twist I was counting on did not quite play out the way I’d hoped and was left hanging that it *might* in later books, but probably not. I am honestly so divested from the trio dynamic that I don’t really care to find out.

This kind of content that follows such predictable story beats is a large part of why I generally don’t enjoy reading mainstream and trad published books.  While I think some formula is required to a certain extent, the more formulaic it is the less excitement I feel reading. That is why I was so excited when more and more authors began mixing genres because it gave a wider room for blending formulas and less predictability to the story.

If you like that (and a lot of people do, no judgment from me!) then be sure to check out Eye of Minds on Amazon and see if it’s for you.

But if you like LitRPG which isn’t so formulaic and lets you get lost in the story and the world-building, then I have some great review recommendations for you!

Of for a cool Book about building those types of worlds, don’t miss The Man of Cloud 9 by Adam Dreece.

This site uses Akismet to reduce spam. Learn how your comment data is processed.