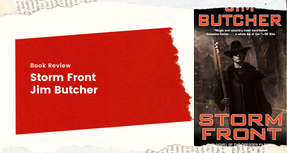 My name is Harry Blackstone Copperfield Dresden. Conjure by it at your own risk. I’m a wizard. I work out of an office in midtown Chicago. As far as I know, I’m the only openly practicing professional wizard in the country. You can find me in the yellow pages, under Wizards. Believe it or not, I’m the only one there.

With rent past due and a decent meal becoming an issue of some importance, Harry needs work, and soon. A call from a distraught wife, and another from Lt. Murphy of the Chicago PD Special Investigation Unit makes Harry believe things are looking up, but they are about to get worse, much worse. Someone is harnessing immense supernatural forces to commit a series of grisly murders. Someone has violated the first law of magic: Thou Shalt Not Kill. Tracking that someone takes Harry into the dangerous underbelly of Chicago, from mobsters to vampires, while he himself is under suspicion of the crimes.

I absolutely am loving The Dresden Files, but was surprised to see it was not included in paranormal mystery. My guess is because it created a new genre. It’s a genre I am a big fan of and even wrote my own series for the paranormal thriller/ suspense genre with Clear Angel Chronicles! But Harry Dresden is a trope maker, the self-aware curmudgeon, the sinner with a heart of gold. The guy who could have it all if he would just step on others to get it. Reading the first book in the series has been a delight. I have a hard time connecting him to the Harry Dresden of Legends of Tomorrow or even the Dresden Files TV series (both of which I experienced before reading the books.) I definitely love the author’s version so much more. We get a deeper look into this character who often comes of flippant and tortured, but getting to see his inner thought process is fascinating.

And that was far more interesting than the actual plot, with a magical serial killer on the loose. While that moved the story along, figuring out the killer was just not as interesting to me as trying to figure out our protagonist. That, to me, is so different from the TV series where the plot drove the story more for me. It could be the difference in age from the time I watched the series to the time I read, but honestly I suspect it is more to do with the format as I wrote Clear Angel Chronicles about the same time the TV series came out and yet my focus in the stories is much more on understanding the protagonists and solving the crimes is just a back story to guide the interactions of the MCs.

If you’ve not read the Dresden Files and you are a fan of paranormal thriller/ suspense and deep characters you really want to understand then I highly recommend you give this series a go. I am loving it and have already started on the next book in the series. Keep an eye out for that review coming soon!

You can get a sample read of Storm Front sent to your Kindle reader via Amazon.