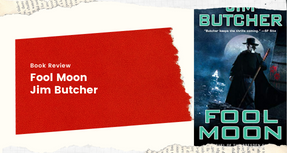 “One of the most enjoyable marriages of the fantasy and mystery genres on the shelves,”(Cinescape) the Dresden Files have become synonymous with action-packed urban fantasy and nonstop fun. Fool Moon continues the adventures of Jim Butcher’s most famous—and infamous—reluctant hero…

You’d think there’d be a little more action for the only professional wizard listed in the Chicago phone book. But lately, Harry Dresden hasn’t been able to dredge up any kind of work: magical, mundane, or menial.

Just when it looks like he can’t afford his next meal, a murder comes along that requires his particular brand of supernatural expertise. There’s a brutally mutilated corpse, and monstrous animal markings at the scene. Not to mention that the killing took place on the night of a full moon. Harry knows exactly where this case is headed. Take three guesses—and the first two don’t count…

This is the second book in the Dresden files series by Jim Butcher and I absolutely loved it! I am a huge fan of werewolf mythology and I love how  they added a fun bit of extra world-building by pulling from several different mythos and treating them as separate entities. I also loved the continued tension being built between Dresden and Detective Murphy and how his assumptions of what is causing it keep running him afoul. While I love the flawed hero aspect, I did find it beyond frustrating that he had a lot of self-realizations (I know my being closed off and not sharing information is getting people I care about hurt. I’m gonna do better, I swear!) never actually turned into self-actualization. There were several times where he even acknowledged that Murphy would want to know this but then consciously chose to leave her out of it, to both their detriment.

If the author plays this angle right and we see Harry actually attempt to be better (not perfect, he is human after all, but at least BETTER) then I will be so very happy. But if he pulls a Gibbs and sticks to his bad habits, I might just have to drop him on his head.  I have high hopes it will be the former, and not the latter. If so, I will recommend this series to anyone struggling with personal self-development as a template on how to do it. First, we have to know what is broken and process how we can do better. But then we have to do better!

I also want so much more about werewolves. I loved the sneak peek into these three complex werewolf societies, but that was really all we got. It was totally needed to feed the main plot (IE keep the reader and Dresden guessing on who the big baddies are.) but it didn’t give me enough of a look into each type to be satisfied. I hope to see Dresden come up against different werewolf types in the future so we can see more into the different legends and lore.

All in all, a very fun and satisfying read that I highly recommend to anyone interested in urban fantasy mysteries and alternative lore. Looking forward to getting the next books in the series! Want to give it a try? Check it out on Amazon today! Fool Moon Dresden Files